Nancy McCloud did not have any food industry bona fides. She had never worked in a grocery store; not even a restaurant. And yet three years ago, when her local grocery in central New Mexico closed, she wanted to offer the community (population: 863) the fresh foods they otherwise would have to travel 47 miles to get.

Mountainair, New Mexico, is a popular tourist stop because of its proximity to 17th century ruins that harken to the earliest contact between Pueblo Indians and Spanish colonials. It’s known as the “gateway to ancient cities.” But without a grocery store, McCloud feared Mountainair might become another relic of the past.

Some states are trying to tackle their rural grocery gaps. Supporters of such efforts point to tax incentives and subsidies at various levels of government that have enabled superstores to service larger areas and squeeze out local independent grocers. Now, dollar stores are opening in rural regions and offering items at lower prices, posing direct competition to local groceries.

Critics see that development as a threat to public health, since dollar stores typically lack quality meat and fresh produce.

But every town and every store is different, making statewide solutions elusive. Some legislators say they are reluctant to intervene too heavily because the market should close the gaps.

In North Dakota, a legislative panel is studying rural food distribution and transportation amid a steep decline in the number of groceries serving rural areas. The committee is considering whether there are public policies that could work, said state Rep. Thomas Beadle, a Republican committee member. But Beadle hopes consumers will organize and solve problems on their own.

“North Dakota is a red-leaning state,” Beadle said. “We’re much more free market than having government intervention. It really would take a drastic instance for the state to step in.”

State Sen. Jim Dotzenrod, a Democratic committee member, said legislators are trying to understand the scope of the problem and whether they can do anything about it.

“One of the things we’re trying to decide is, are there state resources that are currently in place that could be of some value, whether it’s storage or transportation or things like that,” Dotzenrod said. “It may be when we’re done with this, we’ll have to say we don’t have a solution at hand. But I’m hoping that we can come up with some ideas that will help.”

In rural areas, the poor tend to live farther from supermarkets than residents with more resources. The median distance to the nearest food store for rural populations in 2015 was 3.11 miles, and a shade farther for rural households enrolled in the Supplemental Nutrition Assistance Program (SNAP), better known as food stamps, according to a May 2019 report by the U.S. Department of Agriculture, which oversees the program.

A slightly larger share of rural SNAP households than rural non-SNAP households, 8% as opposed to 7%, were more than 10 miles from the nearest store.

In North Dakota, 60% of residents who are income-eligible for SNAP participate, according to Fargo, North Dakota-based Great Plains Food Bank.

“What we’re hearing from clients is that there isn’t anywhere for them to use their benefits,” said Melissa Sobolik, food bank president.

The perception that rural residents make a deliberate decision to live in greater isolation — and have the means to travel to buy the food they need — doesn’t help, according to Evan Weissman, associate professor of food studies in the Department of Nutrition and Food Studies at Syracuse University in New York.

Rural, isolated areas lack public transportation. Traveling can be tough on the poor and seniors. Grocery delivery services, such as AmazonFresh, aren’t widely available or practically accessible to regions where poverty and technology gaps persist.

“Some of these changes that could conceivably help close this gap, in some ways, seem to exacerbate it as rural communities are left behind,” Weissman said.

In 2006, a 70-page report from the New Mexico Food and Agriculture Policy Council revealed the extent of New Mexico’s rural food gap, prompting legislators to act. The report found residents drove as long as four hours round-trip to the closest grocery, or even hitchhiked to avoid high fuel costs.

But New Mexico’s budget fortunes sank with the decline of oil and gas revenues around 2008 and lawmakers’ priorities shifted.

In 2017, Democratic state Sen. Liz Stefanics sponsored a nonbinding resolution calling for a study on the demise of rural grocery stores. But little came of that either. Stefanics said she is consulting with Democratic Gov. Michelle Lujan Grisham on the challenges facing New Mexico’s rural grocers and what might be done to help them.

“If states are going to have economic incentives, whether they’re loans, grants, deductions, I believe rural grocery stores need to be right there at the top of the list,” Stefanics said. “It’s not just about bringing in big companies from out of state to set up jobs, it’s also to encourage the economy within these small communities.”

Brian Moore, owner of Clayton Ranch Market in Clayton, New Mexico, and a former Republican legislator who now heads government relations for the New Mexico Association of Counties, said the group plans to discuss rural grocery sustainability at its meeting later this month.

In recent years, other states have tried to close their own rural food gaps.

In 2015, Alabama enacted a law providing low-interest state grants to new or existing grocery stores in needy areas. And in 2017, Oklahoma created a revolving fund for rural food retailers looking to finance the construction, renovation or expansion of their stores.

At the federal level, USDA oversees the Healthy Food Financing Initiative, established by the 2014 farm bill, which supports healthy food retail projects in more than 35 states.

But some rural grocery owners, such as McCloud in New Mexico, say it’s tough to access those dollars. McCloud didn’t receive any state or federal funding to open her store.

“I couldn’t find any that was applicable for a for-profit business,” McCloud said. “If I were a co-op, yes, but a co-op wouldn’t survive in this particular town. There wouldn’t be enough [people] to help.”

McCloud said she applied unsuccessfully for a USDA loan for electric cooperatives. She turned to a crowdfunding campaign and took out microloans from the community to reopen the store.

Successful store owners are thinking beyond retail and responding to community needs. In Lenox, Iowa, population 1,400, Ramsey’s Market considers itself an “entertainment center.” It offers traditional groceries, a taco shop and an Ace Hardware, with a bar in a 1920s-era gymnasium next door. A rural Illinois school district and bank plan to open a co-op grocery store run by the school district and assisted by students.

Legislators should recognize that the success of measures such as tax incentives or loan deferments will vary by region and within states, according to some experts.

“We did look at tax credits,” said Lori Capouch, rural development director for the North Dakota Association of Rural Electric Cooperatives, who facilitates a statewide rural grocery initiative. “It was kind of a joke because there’s no income being made to need a tax credit.”

“How do you get people to rural communities? Well, you have to offer them the services and benefits they need to live there,” Zwagerman said. “The flipside is how do you offer services of that kind? You have to have people to support them.”

‘There’s Only So Much We Can Do’

In North Dakota, 82% of towns have fewer than a thousand people. Among communities with 2,100 people or fewer, there are 98 full-service grocery stores, down from 137 in 2014, according to research from the state’s association of rural electric cooperatives.

In August, Capouch testified before North Dakota legislators about the issue. The lawmakers were concerned about interfering with free enterprise, she said.

In written testimony, Capouch shared the results of a statewide study that found more than 50% of rural North Dakota stores have a weekly sales volume of $20,000 or less, compared with the U.S. average of $320,000. They have an annual net profit margin of $18,000 or less. Some owners and managers pay themselves after the margin is set.

“In order to have food in some of our communities, it’s coming on the backs of our people,” Capouch said.

All the while, rural communities are sparsely populated and aging. “So from a state’s perspective, there’s only so much we can do,” Beadle said. “We’re not looking at having state-owned groceries.”

Capouch floated lots of ideas: Rural grocery stores could distribute like Amazon, or work with the U.S. Postal Service to develop a more affordable distribution system. Or they could partner with the state for distribution by working with theEmergency Preparedness and Response Section of the North Dakota Department of Health.

The committee discussed state partnerships briefly, “but I don’t know if we’re going to go that route,” Beadle said. For now, the committee will do more fact finding. 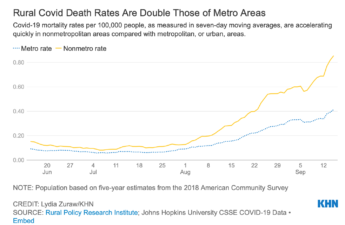 Covid Is Killing Rural Americans at Twice the Rate of Urbanites