Use of the illicitly manufactured opioid fentanyl has had an outsize impact on overdose deaths in Washington state – particularly among people under age 30, according to a new analysis published at the University of Washington School of Medicine.

“For any disease or condition, mortality rates of people under 30 are typically much lower than for people 30 and older. But with fentanyl we are seeing very similar trends in terms of the rate of increase and the level of deaths. That’s not normal for any health condition, let alone overdose,” said lead investigator Caleb Banta-Green.

He is principal research scientist at the Addictions, Drug & Alcohol Institute, housed in the Department of Psychiatry & Behavioral Sciences. Banta-Green and colleague Jason Williams co-authored the paper and posted it today.

The authors said fentanyl use and overdose deaths appear to mostly affect these populations:

Deaths attributable to overdose with any drug are up during the past three years, and fentanyl’s role is massive. (See chart atop page.)  Among people under 30, fentanyl-involved deaths started climbing statewide in 2016. By 2019 it had surpassed other opioid categories of deaths among that population, at the rate of four per 100,000. By 2020, fentanyl-involved deaths had doubled to eight per 100,000 among people under 30.

“The data are stunning,” Banta-Green said. “Historically, deaths involving heroin and prescription opiates were big deals, but the fentanyl trends are even worse. What is profoundly different is the years of life lost among people who overdose at age 20 or 25, in contrast with people who are 45 or 50.”

Washington state lags overdose deaths on the East Coast by about three years and its rate of fentanyl-involved deaths are at about half that of the United States as a whole. Banta-Green said there’s presently no reason to think Washington won’t catch up with the rest of the country.

While the majority of fentanyl is consumed in the form of illicitly manufactured pills, people are increasingly using fentanyl powder to cook into an injectable liquid, he said. “This is how fentanyl will take over heroin among long-term heroin users, much like the rest of the country,” he predicted.

In recent conversations with clinical specialists in addiction, the researchers learned that heroin users typically partake four to six times a day. By contrast, Banta-Green said, “people who use fentanyl do so up to 15 times a day, like someone who smokes cigarettes. Of course this increases their overdose chance dramatically and is very disruptive to their daily lives.”

The analysis identifies state-based and other efforts to mitigate the addiction and overdose trends. It calls out the need to augment existing harm-reduction and syringe-services programs to more completely serve those who may be smoking fentanyl.

Study data came from the Center for Health Statistics at Washington state’s Department of Health. 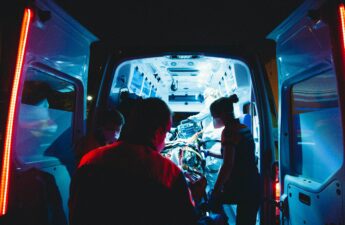 A New Paramedic Policy May Guide Overdose Patients Into Treatment