Despite an economic recovery that lifted people out of poverty in most areas of the country, poverty increased in at least one county in every state between 2016 and 2018.

The poverty rate grew in 30% of counties between 2016 and 2018, according to a Stateline analysis of U.S. Census Bureau county estimates released this month. The poverty rate is the percentage of people in households earning less than the poverty threshold, currently $25,750 for a family of four.

While the overall poverty rate dropped between 2016 and 2018, from 13% to 12%, states varied widely. In New Jersey and Rhode Island, the poverty rate grew in only one county, compared with 83 in Texas.

The counties with the biggest jumps in poverty ranged across the political and demographic spectrum: from 97% white and solidly Republican-voting Carter County in Kentucky to black-majority, Democratic Bullock County in Alabama.

Most of the biggest increases were in areas both rural and Southern. Those areas generally had residents who lacked job training and skills and industries that suffered downturns.

For many counties, rising poverty rates underscore the importance of fully counting residents in next year’s census, since a count of low-income residents will help determine funding available to help them.

Most of the biggest increases were in areas both rural and Southern. Those areas generally had residents who lacked job training and skills and industries that suffered downturns.

The county has job opportunities at its airport, poultry plant, hospital and state prison, and a low unemployment rate of about 3%. But that figure doesn’t count the discouraged workers who have given up on finding jobs and remain in poverty, many of whom are too old to look for work, Padgett said.

“We have a lot of disadvantaged people who are not in the workforce. This goes way beyond Bullock County,” Padgett said. “This is about rural areas across Alabama.”

Carter County, Kentucky, also saw one of the largest poverty rate increases, up 8.5 points to 31.1%.

“This is rural America. We’re rich in self-sustaining nature and neighbors helping neighbors but we don’t have resources,” said state Sen. Robin Webb, a Democrat who lives in Carter County. “I’ve got a car full of toys we’re taking to a school where 60 kids weren’t going to have Christmas.”

Like Bullock, Carter has an aging population, and a meat processing plant is its largest employer. It also has an AT&T customer service center, and many residents drive to coal-related jobs in other areas.

But the county has seen a long decline in business related to the coal industry and has been hit by drug addiction as opioids and meth come in on highways from urban areas, Webb said.

Most of the county’s 20,000 registered voters are Democrats but the county has voted Republican for president since 2008, including 73% for Donald Trump in 2016.

“Now they’re closing the coal-fired plants,” Webb said, “and those tradesmen and -women are being thrown out of those highly skilled jobs, and it’s having a terrible impact.”

While 14 of the 20 counties with the biggest poverty increases were Southern, some Native American-majority counties also saw big jumps.

Poverty in Oglala Lakota County in South Dakota grew 13.3 points to 54%. The Bethel Census Area in Alaska, which is treated as a county for census purposes but is unincorporated, had a jump of 7.2 points to 32.7%.

One of the few big poverty-rate increases outside of rural areas was in San Juan County, New Mexico, home to the regional hub of Farmington. Poverty increased 5.7 points between 2016 and 2018 to 23.1% as low natural gas prices led to a loss of jobs in the area, said Larry Hathaway, the county’s community development administrator.

“We had more people moving out than moving in the last couple of years,” Hathaway said. “Natural gas prices are cheap, so production is down.” Workers have been attracted to more lucrative oil-drilling jobs in southeastern New Mexico and West Texas, he added.

In Bullock County, median income after inflation dropped 18% between 2016 and 2018 to $29,267. Padgett said that may reflect a more realistic estimate than in years past, when immigrants working at the poultry plant were afraid to participate in the 2010 census. That may have resulted in an undercount of the low-income population, distorting income statistics, he said.

“We have to do a better job next year,” Padgett said, referring to the 2020 census. An artificially high median income figure in 2010 left the county with less money for things like police cars. The U.S. Department of Agriculture should subsidize those purchases 55%, he said, but instead the county qualifies for only 25% to 35%.

Getting a better census count is a high priority for Bullock County, said Carla Elston, the county extension coordinator for Auburn University and Alabama A&M. The extension is working to get a better count of Haitian and Hispanic workers, and to encourage them to participate in next year’s census so that the low-income population will be more accurately counted for funding purposes and those residents will get the representation they deserve, she said.

“There is still that fear factor,” Elston said. “We want this to be an accurate count.” 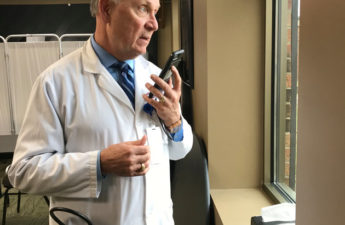