Robert Parish would love to move to a nicer house, something in the Nashville, Tennessee, area where he’d be proud to bring the woman he plans to marry and her two daughters to live. It’s not in the cards, though, as he sees it. His credit is shot, so landlords aren’t eager to rent to him.

Parish ran up unavoidable debts because of treatment for a congenital heart condition, mitral valve prolapse, a disease that twice sent him to the hospital with symptoms he thought meant a heart attack.

The electrician says he earns about $26,000 a year, about as much as his medical bills climbed to in the early 2010s when he was without health insurance. He’s got the total down by about $10,000, but what’s left still feels like the size of a mountain.

“I have my medical debt, and I try to pay it off, but then I can’t pay my rent and my car loan and all these other things,” said Parish, 43. “It feels like I can’t get out of this hole. It stresses me out and worries me day in and day out.”

It worries plenty of other Americans as well. The country is awash in medical debt, $195 billion worth at least, affecting tens of millions, according to survey data and analyses of U.S. Census Bureau data by the Kaiser Family Foundation.

States have become increasingly focused on the problem. Moved by stories of residents losing homes, savings and credit as a consequence of medical debt, nearly a dozen have enacted laws in the past two years to provide protections for consumers.

Some legislators say they began focusing on the issue of medical debt after a related issue, surprise medical billing, spurred legislative action in many states and in Congress in the past few years. Surprise medical billing refers to unexpected, often exorbitant bills patients receive for out-of-network medical services, often during surgeries and emergency room visits.

The debt laws passed in the past two years have required better financial screening to try to ensure hospitals provide more free and discounted care to eligible patients. The laws also mandated medical providers to offer payment plans to eligible patients and created more safeguards in the collections process to, in some instances, prevent liens on homes or garnishment of wages.

All the measures were passed in predominately Democratic-leaning states and Washington, D.C. Two conservative states, Arkansas and Idaho, passed measures in 2021 that extended the time during which creditors could collect on some medical debts, though Idaho’s was a tweak to a patient debt protection law passed the year before. Measures to provide protections to those with medical debt died in Republican-controlled legislatures in Arkansas, Florida and Texas, according to the National Conference of State Legislatures.

Hospital groups in some states initially objected to additional administrative burdens the laws would entail. But in several states, the hospitals remained at the negotiating table and eventually did not oppose passage after winning concessions.

“At first, we objected because of what was in there that we didn’t think could be accomplished,” said Troy Clark, president of the New Mexico Hospital Association. “But we worked with the bill’s sponsors to get it down to where it was in the end. We were no longer in opposition.”

The New Mexico law requires hospitals to proactively screen patients to determine whether they qualify for free and discounted care. It also places limits on collection actions for medical debt.

According to a Kaiser Family Foundation poll conducted earlier this year, 41% of those surveyed — which translates to more than 100 million adults — reported that they currently had a debt due to medical or dental bills. A separate Kaiser analysisestimated that more than a quarter of those with medical debt owed more than $5,000, and half of those owed more than $10,000.

Debt of all kinds can be crushing, but advocates say medical debt is distinct because it is largely unavoidable. An emergency room visit, a necessary surgery, a Caesarian birth, treatment for a chronic health condition such as cancer or diabetes, all can plunge a person into a sea of medical bills and collection notices.

“This is the one kind of debt that none of us take on voluntarily,” said Berneta L. Haynes, a staff attorney and specialist in medical debt for the National Consumer Law Center, which provides legal services on consumer issues for people with low incomes.

The Kaiser analysis shows that the burden of medical debt falls heavily on those who are chronically ill, uninsured, low income, Black or Hispanic or live in states that have not expanded Medicaid eligibility as allowed under the Affordable Care Act.

According to a recent Urban Institute report, 79 of the 100 counties nationwide with the highest levels of medical debt were in states that had not expanded Medicaid. Texas tops the list, with 34 counties in the top 100 with medical debt, followed by Georgia with 20 and North Carolina with 12.

Broadly, the Urban Institute report found, states in the South, where eight of the 12 states that have not expanded Medicaid are located, have the highest concentration of medical debt.

“There’s nothing more critical that a state can do to decrease medical debt than to expand Medicaid,” said Eva Stahl, director of public policy for RIP Medical Debt, a nonprofit that gives people grants to pay off their medical debt.

But having health insurance coverage is not guaranteed protection from medical debt. A 2020 survey by the Commonwealth Fund, a private foundation promoting high quality, equitable health care, found that 43% of working-age adults were either uninsured or underinsured, meaning that their out-of-pocket medical expenses ate up a disproportionately large share of their income.

“One of the big issues with private insurance is that deductibles are so insanely high, and people aren’t budgeting for that,” said Maryland Del. Lorig Charkoudian, a Democrat, who sponsored medical debt protection bills passed by the Maryland General Assembly in 2021 and 2022.

States have adopted a variety of measures. Many have focused on the issue of indigent care provided by hospitals. The Affordable Care Act required that nonprofit hospitals, in return for their tax-exempt status, provide free or discounted care to indigent patients. It largely left it up to the hospitals to determine the eligibility requirements for patients to receive that help.

A few states have adopted income levels below which hospitals must provide care at free or discounted rates. Maryland, for example, requires hospitals to provide free care for anyone earning 200% of the poverty level or less (for an individual, that is an annual income of $27,180 or less). They must provide discounted rates for those who fall between 200% and 500% of poverty.

“We really wanted to help uninsured, underinsured and low-income Coloradans and make sure they were screened for assistance and public coverage and discounts that they qualified for but didn’t know they qualified for,” said Democratic state Rep. Iman M. Jodeh, the House sponsor of the Colorado measure. According to another Urban Institute report, 11% of Coloradoans are in collections for medical debt, with the median amount owed $1,682.

The hospital associations in both New Mexico and Colorado were able to negotiate some flexibility in the timing of the patient financial screening. Clark, of the New Mexico hospital association, said that many of his state’s smaller and rural hospitals do not have administrative staff on nights and weekends to do the proposed screening as quickly as the original bill first proposed.

California, Colorado, Illinois and Maryland all require hospitals to offer qualifying patients payment plans with set caps. For example, Colorado forbids hospitals from billing a patient more than 4% of that patient’s monthly income in a month. California sets the limit at 10% of monthly income, minus living expenses.

Some states also included measures that slow the collections process or, in certain cases, stop it altogether. For example, California bars collection actions until after 180 days from the first bill.

California’s new law also prevents hospitals from sending a patient to collections unless the patient is found to be ineligible for financial assistance. Similarly, New Mexico’s 2021 law prevents hospitals and medical creditors from pursuing collection actions, including filing lawsuits, against patients determined to be indigent.

“They can bill but if someone is indigent, they cannot be sent to collections,” said state Sen. Katy Duhigg, the Democrat who sponsored the New Mexico legislation.

Maryland’s 2021 law imposes some conditions before hospitals can initiate collection actions, including providing an affidavit proving that the patient had been offered a payment plan.

Some of the states also have adopted provisions limiting the ability of creditors to report medical debt to credit agencies, thereby protecting the creditworthiness of patients.

Maryland this year took a step beyond other states. A 2020 report from the state Health Services Cost Review Commission found that 1% of total hospital charges to patients who likely qualified for free care in 2017 and 2018 — amounting to about $120 million — was collected from them.

The finding led to Charkoudian’s successful bill this year that sets up a process to identify and repay money to indigent hospital patients who paid for medical care that should have been provided for free from 2017 to 2021.

“That is significant and alarming,” said Charkoudian. “That was money that should have been paid but instead came out of the pockets of people struggling to make ends meet.”

Many Patients Can’t Afford Health Costs Even With Insurance 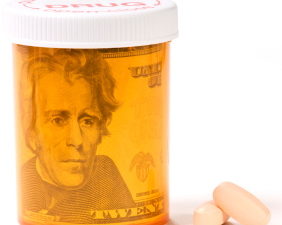 In America, Cancer Patients Endure Debt on Top of Disease