Governors of both parties are facing a deluge of lawsuits from right-wing lawmakers, conservative legal groups and Republican activists who say chief executives need legislative approval to shut down businesses, require mask-wearing or force residents to stay home to slow the spread of the novel coronavirus.

Judges have tossed out the lawsuits or sided with governors in most states where cases have been filed. But in Wisconsin and Michigan, conservative-leaning state Supreme Courts have struck down governors’ emergency public health orders.

Evers last week announced an executive order that recommends, but doesn’t require, Wisconsinites to stay home and businesses to limit visitors and staff as well as require masks. He noted that a March stay-at-home order and business closure requirement issued by the state health department didn’t survive court challenges.

“That order was struck down by the Wisconsin Supreme Court — a decision that hamstrung our ability to respond to this virus by using the tools supported by science and public health experts,” he said in a speech imploring state residents to take the virus seriously.

There were only 457 confirmed coronavirus cases in Wisconsin when the health department issued the March order. Last week, more than 6,400 people were diagnosed every day, according to state data posted on Sunday.

Nationwide, many of the GOP lawsuits were filed earlier this year when COVID-19 cases were flat or declining. As cases soar to unprecedented levels, the politics of public health orders may shift.

Rising cases in states such as Indiana, Iowa, North Dakota and Utah are leading Republican governors to embrace policies such as mask mandates and limits on gatherings, just as the Republican governors of Arizona and Texas announced new restrictions in response to skyrocketing cases this summer. In Ohio, Republican Gov. Mike DeWine has said in recent days that he could order restaurants, bars and gyms to close.

Conservative legislators also could change their tune. Republican Wisconsin Assembly Speaker Robin Vos, who hasn’t talked to Evers in six months, told reporters last week that he was willing to “hit the reset button” and start working with the governor, according to the Milwaukee Journal Sentinel.

And the November election results may lead to more favorable rulings for Whitmer: Michigan voters elected a new liberal justice, moving the court to a 4-3 Democratic majority.

Some experts doubt that elected leaders in Wisconsin and Michigan can agree on a plan to control the virus anytime soon.

“Our political system is so polarized that you can’t even get them to sit down and rationally talk through what makes sense to stop the pandemic,” said Peter Jacobson, co-director of the Mid-States Region Office at the Network for Public Health Law, a nonpartisan Edina, Minnesota-based group that advises public health officials.

Vos has called for more testing but opposed mask-wearing requirements and business closures, according to news reports. His office did not respond to calls or emails from Stateline seeking comment.

Republican lawmakers and conservative legal groups say the lawsuits merely seek to maintain a balance of power between governors and legislatures.

“It’s not about what policy measures we should take to respond to COVID-19, but who gets to make those decisions and according to what processes,” said Anthony LoCoco, deputy counsel at the Wisconsin Institute for Law and Liberty, a conservative legal group that has sided with Republican legislative leaders in their cases.

Some Democrats and outside legal experts, however, say the lawsuits are often partisan efforts to reduce the power of Democratic governors and reflect conservative skepticism of policies such as economic restrictions and mask mandates.

While Democrats tend to support major government interventions to reduce the virus’ spread, President Donald Trump and many conservatives have argued that COVID-19 isn’t that dangerous and that public health orders must not hamper the economy or infringe on civil liberties such as the right to gather for worship.

In a few instances, left-leaning groups have sued governors for not doing enough to slow the spread of the virus. In Florida, for instance, teachers in July sued Republican Gov. Ron DeSantis and state education officials in a bid to block an emergency order requiring schools to open their buildings for instruction in August. The latest court ruling sided with the governor.

“What you have, in essence, is different philosophies on the role of government and how dangerous this pandemic is,” Jacobson said.

Some of the lawsuits have been supported by the Trump administration, which has urged courts to make sure public health orders don’t abuse civil liberties.

The litigation doesn’t stop there. Republican lawmakers also have sued the Republican governors of Arkansas and Maryland. In Ohio, they’ve drafted articles of impeachment against DeWine.

In general, judges have sided with governors. But in Michigan and Wisconsin, court rulings have limited the executive branch’s power to act alone.

In Michigan, the state Supreme Court ruled last month that the governor can’t extend an emergency declaration without the legislature’s consent and struck down one of two laws giving Whitmer emergency authority. The ruling invalidated many of the orders Whitmer had issued since April 30.

Most of the orders—such as face-mask requirements for certain settings, and capacity limits for indoor gatherings—were quickly replicated by the Michigan Department of Health and Human Services, which under state law can issue emergency orders during an epidemic.

But the agency also has been sued, including by a private school and a chiropractor’s office contesting its gathering and masking rules. “There are potential legal vulnerabilities if the courts think that our public health director has gone too far,” said Nicholas Bagley, a professor at the University of Michigan Law School.

The Whitmer administration appears to be leaning on the health department to issue public health orders, for now. The state health department on Sunday ordered new limitations on gatherings, including prohibiting most in-person instruction and extracurricular activities at colleges and high schools.

In a statement posted online, Republican Senate Majority Leader Mike Shirkey criticized the Whitmer administration for issuing new public health orders without buy-in from lawmakers. “We are disappointed that Gov. Whitmer chose to go it alone, again,” he said.

She also has asked lawmakers to codify a mask mandate. “I think it’s important, now that the Supreme Court has kind of muddied the waters and created a lot of confusion about what is the current law here in Michigan,” she explained during a press briefing last week.

Both Shirkey and House Speaker Lee Chatfield have opposed mask mandates in the past. Shirkey spokesperson Amber McCann said in an email that Shirkey and his team are talking with the governor and her team about a response to COVID-19, but did not comment further on those discussions.

A Breakdown in Wisconsin

Nowhere has the debate over executive power been more rancorous than in Wisconsin, where the governor and legislative leaders are barely on speaking terms even as the virus has killed more than 2,600 people and hospital beds are filling with COVID-19 patients.

Every major executive action Evers and the state health department have taken to slow the spread of the coronavirus has been challenged in court by Republican lawmakers, conservative legal groups and business groups, starting with the legislature’s spring lawsuit challenging the stay-at-home order.

“Wisconsinites deserve … a plan to end the constant stream of executive orders that are eroding both the economy and their liberty even as the state is clearly seeing a decline in COVID-19 infections,” Vos and Republican Senate Majority Leader Scott Fitzgerald said in a joint statement at the time.

The Wisconsin Supreme Court ruled in May that the health department’s stay-at-home order was unenforceable because it didn’t go through the normal rulemaking process. That process involves approval by a Republican-controlled legislative committee.

Chief Justice Patience Drake Roggensack’s majority opinion didn’t address Evers’ emergency powers, only those of the health department. But she included a word of warning: “In the case of a pandemic, which lasts month after month, the Governor cannot rely on emergency powers indefinitely.”

Since then, Evers has been sued by taxpayers and conservative legal groups over his emergency declarations and the orders made under them, such as an order that Wisconsinites wear masks in indoor public places. Republican lawmakers filed a friend-of-the-court brief supporting the suits, one of which was heard by the Wisconsin Supreme Court on Monday.

Evers also has been sued by bars and trade groups over his order limiting indoor gatherings. The order remains in place.

Edward Fallone, a Marquette University associate professor of law who has twice run for the state Supreme Court (court elections are nonpartisan), said the court’s ruling on the state-at-home order was pure conservative activism. “They have really cut the legs out from under our health officials,” he said.

Fallone said he worried that the court’s legal arguments—which focused on the text of the law, rather than the intent of the law—could be used to again chip away at the governor’s power. “It’s the adoption of that approach that I think has the farthest-reaching consequences,” he said.

Evers is now preparing pandemic relief legislation and hoping to get the legislature on board. As in Michigan, it’s unclear whether Republicans will agree to public health mandates.

Voters again elected Republican majorities to both the state Assembly and Senate this year. After his re-election earlier this month, Vos said in an interview with a local paper that the election results show voters have rejected Evers’ approach to the pandemic.

“He’s sitting in his basement, not unlike Joe Biden,” Vos said of Evers, the Racine Journal Times reported. “This [vote] is repudiation of Tony Evers’ leadership style. … He abjectly failed.” 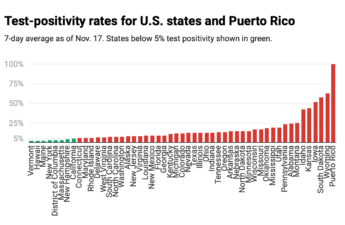 No, soaring COVID-19 cases are not due to more testing – they show a surging pandemic

What Biden Can Do to Combat COVID Right Now 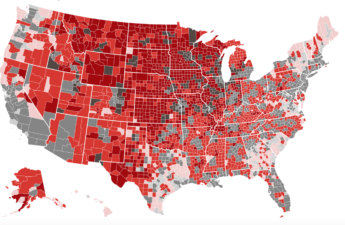 Rural hospitals are under siege from COVID-19 . . . here’s what doctors are facing, in their own words