Recent increases in King County overdose deaths, driven primarily by fentanyl found in illicit pills and powders, are prompting new outreach to alert people to the risks of illicit drug use.

The overdose increases are being driven by both new and ongoing trends:

Findings released earlier this year showed that drugs and alcohol caused the overdose deaths of 415 King County residents for all of 2018, with 77% by multiple substances.

What people can do

Everyone should be aware of the risks associated with illicit drug use, and particularly the recent increase in fatal fentanyl overdoses:

Anyone can help prevent a fatal overdose:

In response to the recent increase in overdose deaths, Public Health is alerting people at greatest risk through broad public announcements as well as focused channels. Materials will be distributed through needle exchange networks, as well as other partners, such as treatment centers, jails, emergency rooms and first responders.

There are over 100 locations across King County where people can receive medication for opioid-use disorder. Among Medicaid-covered patients, buprenorphine prescriptions in King County have increased from 739 in 2014 to over 5,000 in 2018.

Innovative treatment models for opiate use disorder are being established and expanded by King County:

Distributing naloxone and reversing overdoses: During the past two years, King County has increased access to naloxone among law-enforcement officers, treatment providers, and directly to the public through public health needle exchange sites. In 2018, over 20,000 naloxone kits were distributed and at least 5,000 overdoses were reportedly reversed using naloxone, and the total number of reversals is likely higher.

In August 2019, the Washington State Department of Health issued a statewide order to allow any person or organization to obtain naloxone medication from a pharmacy without a prescription.

Methamphetamine and other illicit substance use are often related to adverse social and environmental conditions. A comprehensive prevention approach must address the underlying social, economic, and psychological stressors driving substance use disorders and addiction, including economic hardship and poverty; housing instability and homelessness; behavioral health disorders including depression and anxiety; discrimination and racism; and adverse child experiences and trauma. 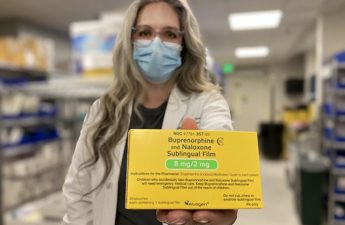